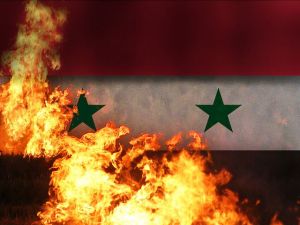 Isil/IS/Daesh are a problem. There’s no negotiated settlement to reach with them, they can’t be reasoned with because they believe they are ushering in the apocalypse and, importantly, they believe that’s a good thing to do. Their King, who I will not dignify with the title of Caliph, is a racist, a rapist and a murderer who has used their fanaticism to carve himself a kingdom and now we’re going to bomb it.

So how did it come to this? Well, we’re talking about a region of the world which has arguably birthed all of the world’s most successful religions that sits on top of an enormous volume of oil but very little fertile land outside of Egypt. It’s not hard to see how that could be a powder keg, in fact it’s hard to see how it could not be. These are, however, very broad strokes. A potted, simplified history will follow.

Daesh grew out of Al Qaeda in Iraq (AQI), AQI declared an “Islamic State” in Iraq and changed its name to Islamic State in Iraq (ISI) because they have no imagination because fascists tend not to. They were no longer getting along with Al Qaeda because ISI were brutally persecuting and murdering Shia Muslims. Why were they persecuting Shia Muslims? They say it’s because they’re infidels but really it’s for the same reason all fascist states start persecuting minorities; a shared enemy is a uniting force. It is an effective, awful way to bind people together.

Of course they didn’t stop there. They did terrible things to Christians, to Jews, to Yazidis, to Druze, to gay people, to anyone who didn’t fit in to their narrow, misogynistic, fascist cult. It wasn’t enough, they underestimated the war weariness of the West so they started to attack targets at home. The Paris attacks were the most notable, though there have been other, smaller atrocities.

So how can I argue against bombing them? How can I, I hear some of you ask, condemn military action against them?

The short answer is that I’m not. They have to be stopped. I’m not against action against Daesh, I’m against this action against Daesh. It’s another open ended mess of meaningless, mission creep drivel. Time and again in the ten hour House of Commons debate we saw MP’s stand and warn us against assuming that we were about to repeat the mistakes of the past. They didn’t really seem to tell us in what way it would be different this time.

This whole thing is probably closest to Libya. Not Iraq so much, though the rumbling war there was an unmitigated disaster by any sane measure. In Libya we sent the bombs down to help a revolution in progress and saw a vile regime replaced by a thousand warring militias and an utterly failed state, a post apocalyptic, Mad Max wasteland nightmare brewing the worst kinds of violence, a chaos of pain and misery.

The Prime Minister claims there are 70,000 ‘moderate’ Syrian rebels with whom we can work to build a post-Assad Syria. This claim rightly raised more than a few guffaws. The idea that any kind of remotely accurate data could be extracted from the Syrian maelstrom is laughable at best, I suspect this one is on a par with the ‘42 minutes’ claim made by Blair before Iraq.

So what am I trying to say? Honestly I’m conflicted. I don’t want to see a war over there but that’s not really an option because it’s already happening. Britain does share some of the responsibility for the mess Syria is in, the sense of responsibility doesn’t come from some vestigial colonial urge. Daesh are awful and they absolutely will not stop until they are made to stop and the longer they’re left there the worse it will get both for the people living under their rule and us in the West. Doing nothing could never be an option for any nation in Britain’s position, no matter what form of government or culture or faith.

I suppose, at heart, I feel you cannot fight half a war. We have to speak with Russia to make something workable. We have to help the Kurds find a future. We have to work with Iran. We cannot allow Assad to reestablish control now that the people of Syria have comprehensively rejected his rule. We need a broad coalition, a workable solution and achievable goals. We need to know what we’re getting in to and how to get out of it. We’re not really doing any of those things.

So I’m against airstrikes because bombs alone won’t bring us peace. They won’t lift the spectre of international terrorism from the world. They won’t kill only the bad people, no matter how accurate they are and how much the political leaders might wish it. They can’t emancipate women or rebuild the temple of Bel. They can’t teach a child that a martyr’s shroud is unbecoming. All a bomb can do is explode.

© Jack Anderson and theanarchogoth, 2011. Unauthorized use and/or duplication of this material without express and written permission from this blog’s author and/or owner is strictly prohibited. Excerpts and links may be used, provided that full and clear credit is given to Jack Anderson and theanarchogoth with appropriate and specific direction to the original content.
%d bloggers like this: